There was a strong wave of this kind of thing a decade ago, but the trend of planting churches targeted to a specific generation and segregating church services remains a strong impulse in evangelical churches. In some ways, the inclination is good: we see a lot of young people leaving the church, so let’s find a way to make church something they are more attracted to.

From an article in Christianity Today about this trend, Hemingway notes that these churches tend to morph into traditional congregations anyway, as young singles grow, get married and have kids. Suddenly you either have to change the focus of the congregation, or start squeezing people out.

Out of Ur recently ran an article on some possible coming trends in the church. Based on what I have seen from the last several years of generational ministry, I would like to add transgenerational church to the list. I know, the best ideas have been around for the longest time.
Posted by Phil Steiger at 1:57 PM 2 comments:

On the Power of Words, and a Prayer for Our Time

1 Help, LORD, for no faithful one remains; the loyal have disappeared from the human race.
2 They lie to one another; they speak with flattering lips and deceptive hearts.
3 May the LORD cut off all flattering lips and the tongue that speaks boastfully.
4 They say, "Through our tongues we have power; our lips are our own—who can be our master?"
5 "Because of the oppression of the afflicted and the groaning of the poor, I will now rise up," says the LORD. "I will put in a safe place the one who longs for it."
6 The words of the LORD are pure words, like silver refined in an earthen furnace, purified seven times.
7 You, LORD, will guard us; You will protect us from this generation forever.
8 The wicked wander everywhere, and what is worthless is exalted by the human race
Posted by Phil Steiger at 10:00 AM No comments:

The Prosperity Gospel and Economic Ruin?

The Atlantic recently ran an article touching on another possible cause for the housing bubble and our economic troubles. It had an arresting title: Did Christianity Cause the Crash?

In what is to me an aggravating and enlightening article, Hanna Rosen does a great job of covering at least two big issues – the prosperity gospel and the national demographics of foreclosures. You might be able to guess the thesis of the article. Rosen details how several hot spots of the prosperity gospel overlap the foreclosure hotspots. Is it possible that this way of preaching the gospel encouraged people to seek subprime loans and banks to offer them in unusual numbers?

As it turns out, I think she has a case. A couple of excerpts from her article:

Demographically, the growth of the prosperity gospel tracks fairly closely to the pattern of foreclosure hot spots. Both spread in two particular kinds of communities—the exurban middle class and the urban poor. Many newer prosperity churches popped up around fringe suburban developments built in the 1990s and 2000s

Nationally, the prosperity gospel has spread exponentially among African American and Latino congregations. This is also the other distinct pattern of foreclosures. “Hyper-segregated” urban communities were the worst off, says Halperin. Reliable data on foreclosures by race are not publicly available, but mortgages are tracked by both race and loan type, and subprime loans have tended to correspond to foreclosures. During the boom, roughly 40 percent of all loans going to Latinos nationwide were subprime loans; Latinos and African Americans were 28 percent and 37 percent more likely, respectively, to receive a higher-rate subprime loan than whites.

And it’s not just that a prosperity gospel may have encouraged people to seek these loans, but banks saw an opportunity afforded by these churches.

The idea of reaching out to churches took off quickly, Jacobson recalls. The branch managers figured pastors had a lot of influence with their parishioners and could give the loan officers credibility and new customers. Jacobson remembers a conference call where sales managers discussed the new strategy. The plan was to send officers to guest-speak at church-sponsored “wealth-building seminars” like the ones Bowler attended, and dazzle the participants with the possibility of a new house. They would tell pastors that for every person who took out a mortgage, $350 would be donated to the church, or to a charity of the parishioner’s choice. “They wouldn’t say, ‘Hey, Mr. Minister. We want to give your people a bunch of subprime loans,” Jacobson told me. “They would say, ‘Your congregants will be homeowners! They will be able to live the American dream!’”

[As a side note, you might wonder why banks would seek such risky loans when they inevitably default. The answer to that question leads you directly to the root cause of the housing bubble and the current crash. The only reason a bank would buy those loans is because, as a result of the Community Reinvestment Act run by Senator Dodd and Rep. Frank, banks were promised that if they provided “affordable housing” (the same thing as subprime loans to people who couldn’t pay them back), the federal government would buy those mortgages through Fannie and Freddie. Over a short period of time the Fed government had millions of dollars worth of worthless paper, several financial institutions got caught in the mix, and things went downhill from there.]

But back to the problems of the prosperity gospel. I have a deep and dark spite for that kind of spiritual vomit, and I have no problem believing it played a role in the financial destruction of thousands of people in the pews. Rosen visited one such Latino church and pressed the pastor, Garay, about the failings of the whole prosperity system. His answer qualifies him for a punch in the mouth, which I am more than willing to take care of.

Once, I asked Garay how you would know for certain if God had told you to buy a house, and he answered like a roulette dealer. “Ten Christians will say that God told them to buy a house. In nine of the cases, it will go bad. The 10th one is the real Christian.”
Posted by Phil Steiger at 11:23 AM 2 comments: 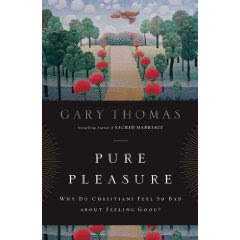 I started reading Gary Thomas’ Pure Pleasure the other day, and I found one of his opening premises to be right on the money. He writes, “Spiritual triumph begins and ends with finding our satisfaction in God above all things.” He argues that the best way to deepen relationship with God and find true spiritual transformation is to find our joy and pleasure in Him, instead of being frightened into obedience.

There are two ways to encourage a walk with God, one through fear of the consequences of sin, and the other through love of God. We ought to never ignore or stop paying attention to how sin robs us of life and destroys our relationships, but we need to pick up the theme of love and joy and pleasure in God.

Are we excited about what life with God in this world can be like? Or are we afraid of what sin will do to us? Both questions are valid, but for some reason we tend to ignore the first and most enduring reason for life with Christ.

Do I seek God because I love Him? Do I want His life in mine because I am spellbound by His glory? Does my heart long for the beauty and majesty of God?
Posted by Phil Steiger at 10:06 AM 1 comment:

Is Christ Ever Safe?

The LHC book club is currently reading through Dorothy Sayers', Letters to a Diminished Church. A great quote from early in the first essay:

The people who hanged Christ never, to do them justice, accused him of being a bore - on the contrary, they thought him too dynamic to be safe.
Posted by Phil Steiger at 6:35 PM 1 comment: